The inability to have a penile erection is a medical condition that men suffer from. Various men suffer from this erectile dysfunctionality (ED) from different parts of the world. This illness can be caused by an injury sustained in an accident; it can happen as a result of depression, anxiety, or stress. Nowadays, there are different drugs available to treat this illness.

What is Malegra 50mg Tablet?
Malegra 50mg tablet has a vital ingredient which is Sildenafil Citrate that is used in treating impotence or erectile problems in men. Sildenafil Citrate, when combined with sexual stimulation, works by relaxing, as well as increasing blood flow to the penile region and helps to keep the male organ erected. This tablet does not fight against or protect from sexually transmitted diseases. This medication gives the best result when the initial cause of the ED is physical or psychological.

How to use Malegra 50mg Tablet?
Taking this tablet is very easy. Sildenafil Citrate tablets are to be taken by mouth i.e., orally with a glass of plain water. It can be used with or without food, but for the best result of this tablet, it should be appropriated on an empty stomach. If taken after a meal, it could delay its effect. Sildenafil Citrate is best taken as directed by the physician. These drugs should be swallowed as a whole. Avoid chewing it.

Malegra 50mg Tablet interaction
Malegra 50mg is a drug that interacts with some other things. It is best if a doctor is consulted to know what the drug’s interactions are concerning a particular patient because interaction varies from person to person. The doctor can conclude the patient’s medical and nutritional lifestyle.

FAQs
Q. What is the duration of effectiveness?
A. it lasts up to about 4 hours

Q. is it safe to consume alcohol also?
A. alcohol should be avoided or reduced to a minimal level while using this drug. 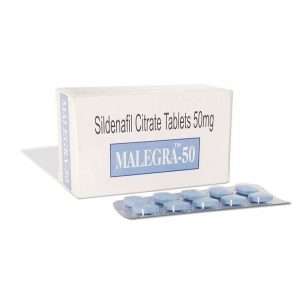