Buy Qubol Online, which is Anti-Cancer medication, and it contains Anastrozole. Anastrozole Tablets used to treat breast cancer that happens after menopause.

Buy Qubol Online, which is used for the treatment of breast cancer that occurs in women after post-menopause. The task of Qubol 1 mg is to reduce the production of estrogen hormone and treat cancer in its early stages. The growth of the tumor cells is also reduced, as they do not get the hormone to grow. If cancer has grown into an advanced stage, then its first stage can be treated with this tablet. Anastrazole 1 mg can be taken as a substitute.

Qubol 1 mg has to be taken after consulting a doctor and according to the prescription given by him. There is no need to chew the tablet. Patients can consume the while tablet with or without food. The Anastrozole Tablets have to be consumed once in a day, and people need to fix the proper time to take it. Anastrazole 1 mg has to be consumed at the set time, and none of the dosages should be missed.

Side Effects of Anastrazole 1 mg

People can suffer from various side effects, which include hypertension, clotting of blood in veins, sweating, rashes on the skin, gastric problems, to name a few. 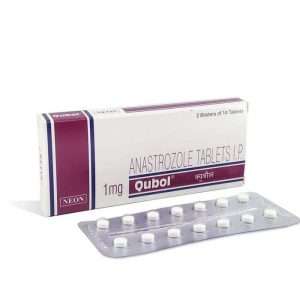